Something to sink your teeth into

You don’t have to be a fan of horror to know that stories about vampires are ripe with metaphors.

Lately, and quite inadvertently, I’ve spent a bit of time thinking about vampires – and what they represent metaphorically - thanks to my reading material.

First, I finally bit the bullet (or the jugular, as it may be) and started reading Stephenie Meyer’s mega-selling vampire series, starting with Twilight. I’d been putting this off for a while (as a Josh Whedon fan, I was concerned about stereotyping myself as a fan of all things vampiric).

After I’d read the first two Meyer books, a novel I’d on order from the library became available, The Opposite of Life by Australian author Narelle M. Harris. It was about – you guessed it – vampires.

It was an interesting exercise reading two different stories about vampires back to back, and analysing how the authors tackled the mythology and metaphorical aspects of their tales.

While Joss Whedon used vampires, demons and other “big bads” in his Buffy stories as metaphors for real-life monsters and personal battles, Meyer and Harris take different tacks – along the way also providing refreshingly different takes on vampire mythology.

What prompted me to finally pick up Twilight was an article that revealed Meyer was a practicing Mormon and that – the first book at least – contained no sex and barely any violence. But what really piqued my curiosity was the description of the story as a metaphor for sexual restraint.

At the core of the four-book series is a romance between teenage Bella and her impossibly attractive classmate Edward, who also happens to be a vampire. Edward and his “family” have chosen to abstain from biting and killing humans, but Bella’s blood is so appealing to Edward, that even though he loves her, he’s terrified he’ll her if he loses control in her proximity.

And so, their relationship is one of restraint and longing, filling the pages with sexual tension. The first book captures this tension and conflict remarkably well - to the point of becoming addictive. The second and third books (I’m halfway through the latter) focus more on the mythology Meyer is building, along with Bella’s growing desire to become a vampire so they can be together forever. (I’ll save my critique on the series until I’ve finished the fourth book.)

Harris, on the other hand, takes a more poignant approach in a tale that’s also fresh, witty and – most importantly – original.

Her vampires – who stalk the streets of Melbourne – don’t need human blood to feed their thirst; they need it to “feel” anything.

In this story, wanting to become a vampire is about avoidance. Not avoiding death, but avoiding life and all its pain, which is a palatable option for narrative character Lissa. Too many people in Lissa’s life have died – including some unfortunate souls in Melbourne’s coolest gothic hang-outs – so when she befriends a remarkable unsexy vampire, she seriously considers becoming one herself to avoid any more pain.

Despite the bleak undertones, The Opposite of Life is an easy read and one I really enjoyed. It’s apparently the first of a series featuring Lissa and her forays into the world of vampires (Melbourne’s real underworld), and I’m looking forward to seeing where the story goes next. Harris' style is somewhere between chicklit and goth horror. And it works.

In both stories, the narrative characters have a choice to make about eternity. One is driven by love and desire, the other (at least in Harris' first offering) is driven by sadness and grief – ultimately tempered by revelation.

I, for one, am enjoying seeing a classic mythology being given new treatment in hybrid genres. But I think once I’ve finished Meyer’s Breaking Dawn, I’ll take a break from the creatures of the night for a bit.
Posted by Paula Weston at 3:13 AM

Very interesting post. I went to Brigham Young University with Stephanie Meyer back in the day and even had a few literature classes with her. Thus I thought i would give her novels a try as most of the teenage girls I teach are obsessed by them. I couldn't finish it. I found the character of Bella lackluster, brainless, trite and cliche. I only gave it until page 74, so maybe I judged too quickly as I seem to be in the vast minority on this point.

It is interesting to think of the metaphor of abstinence, and it is one, growing up in the LDS religion, that I could see being very prevalent in the novels. And interesting idea, and yet, the unfulfiled tension, at least I have heard, is what keeps people reading.

Thanks for these reviews!

Paula,
How on earth do you read so much?
Either way, vampires rock.
And you can't tell me Spike wasn't real. He was, I tell you, he was.

You are not the only one who has put off reading the Twilight series. I haven't, yet, either, but might give it a try if I can get the first one at the library. I don't want to spend money on it.

I can understand you not wanting to spend money on rubbish Linda. Twilight. Try shite! Can't do it, won't do it. Vampires do rock Daniel. A wee bit. Not like Ace of Spades by Motorhead or any one of ACDC's back catalogue. The vampires PW's talking about here are only dangerous when it comes to how good looking they are. Devastatingly handsome I heard one school girl say in the bookshop last week. Doesnae say much for it in the harum scarum stakes then (oops!). On the rockometer that's about 50 feet below Avril Lavigne getting her guitar out of its velvet case. Know what I mean?
I thought this blog was about great stories? Not ordinary stories about flat cartoonish characters. Flatness is something we look for in out plasma tv sets these days, not in our books. Meyers' less than average works have been blown out of proportion by a genericised reading public aching to fill the hole that wee wanky wizard left. Next you'll be telling us how good poo Brown Dan books are...

And he's back...
Classic post Inky. Nice to see you've got an open mind about these books (considering you haven't read any of them... actually, on second thoughts, don't. You'll just hurt yourself when you pop a vein).
If only those teenage girls knew what you really thought about Edward Cullen when you were selling them those books - you'd get attacked in the car park after work!
Seriously though - thanks for the post. I'm all for the open discussion! (I'm already nervous about the review I plan to write on the series in a week or so..)

Shadows: Book 1 of the Rephaim series 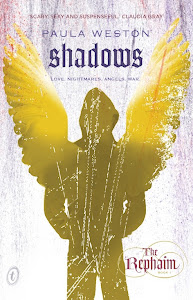 Now available Australia and New Zealand; UK in January 2013; US and Canada in Fall 2013